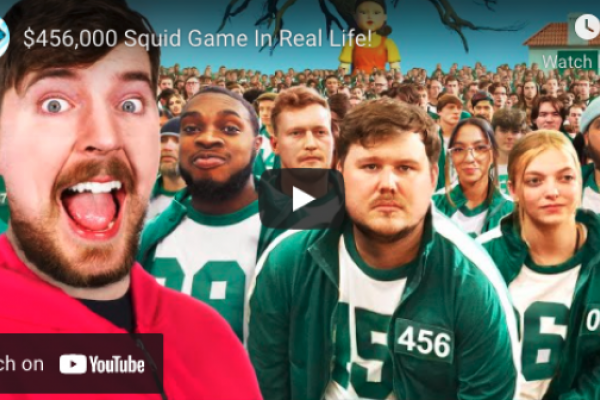 A re-creation of the most popular Netflix Inc (NASDAQ: NFLX) series of all time has generated more views in a month than the original. The strong viewership could show the strength of the Netflix series and also the value of the creator economy of free easily consumable content.

What Happened: Jimmy Donaldson, known as Mr. Beast, is one of the most popular creators on YouTube, a unit of Alphabet Inc (NASDAQ: GOOG)(NASDAQ: GOOGL).

In his most expensive video ever made, Mr. Beast conceived the “$456,000 Squid Game In Real Life,” a re-creation of the popular “Squid Game” series from Netflix. The YouTube video featured 456 contestants going through sets re-created from the show for the chance to win $456,000 and not die like on the show.

The YouTube video generated 2.1 million views in its first 30 minutes on the website. The video, which was released on Nov. 24, has 125.5 million views at the time of writing.

With 111 million views in the first five days of being released, the 25-minute video had as many views as Netflix had for “Squid Game” in its first month on the streaming platform.

Mr. Beast spent $3.5 million on the video, which was supported through a partnership with mobile game company Supercell. Estimates say Mr. Beast may have made back prize money from advertising on the video.

The “Squid Game” video from Mr. Beast could also be the most viewed non-music video on YouTube in its first 24 hours, according to reports.

Why It’s Important: Mr. Beast is one of the top-earning YouTubers, ranking second in 2020 with $24 million earned and more than three billion views.

Known for giveaways and viral videos of stunts and contests, Mr. Beast has attracted a strong following that generates millions of views on each of his videos.

“I’m literally living the life 13-year-old-me would dream of every night and I’m super grateful,” Mr. Beast shared on Twitter.

“Squid Game” is the most-watched series on Netflix. The show ranked No. 1 in 94 countries including the U.S. A second season to the popular series has been confirmed by the “Squid Game” director. More than 142 million member households globally watched “Squid Game” in its first week, out of 215 million subscribers.

Netflix has enjoyed the success of the movie with an influx of new subscribers and strong anticipation for a second season.

Creator Economy: On “This Week In Startups,” entrepreneur Jason Calacanis highlighted the success of the Mr. Beast video and also the impact the creator economy has had with free content.

“What would a free tier look like for Netflix?” Calacanis asked.

The entrepreneur said Netflix could offer a certain number of episodes of shows for free or a certain amount of time per day, like an hour, for free and gain more viewers and views on the content.

“How many people around the world would use a free version?”

Th video has 125 million views, which is massive, but makes up a smaller percentage of YouTube’s overall 2.3 billion users versus Netflix’s percentage of people who watched “Squid Game,” Calacanis added.

“What would happen if Netflix signed Mr. Beast or content contributors?”

Calacanis said Netflix is focused on creating its own content but said it could be smart to consider adding famous YouTubers and adding a freemium model.

© 2021 Benzinga.com. Benzinga does not provide investment advice. All rights reserved.

Next post Our Academic Libraries and ‘The Library: A Fragile History’

[ad_1] The Bored Ape Yacht Club (BAYC) is an exclusive community for holders of the ape and mutant themed NFT...

[ad_1] Living a dream Ecommerce has changed the game for struggling artists around the world, especially for those working in...

[ad_1] When I was in college I went to a concert thrown by a commune that lived in the middle...

[ad_1] Amazon wants to help you roll out an army of robots. The company on Monday announced AWS IoT RoboRunner, a platform meant to...

[ad_1] Not a day goes by without someone pitching me by WhatsApp, LinkedIn, or countless other places, and more often than...